On the basis of the photos and captions below, I’ll try to explain sexing and age determination in simple language (otherwise not even I would understand it). First I'll make a distinction between three age categories:

Juvenile
From nest until the first moult (first calendar year). In reality it's a very short period of time.

First year
After the first moult in Autumn (first calendar) until the second moult one year later (second calendar). So it’s exactly a period of time of one year.

Adult
From the second moult in Autumn (second calendar) onwards.

An adult male is less streaked on its flanks and breast than a female or an immature bird.

Also a distinctive feature of male redpolls is the fact that these birds sing. Keep in mind that also second calendar year males (redpolls which are born the year before) sing.

Besides that, only the males ‘feed’ the females;  the second calendar year males also like to feed the females to impress them. 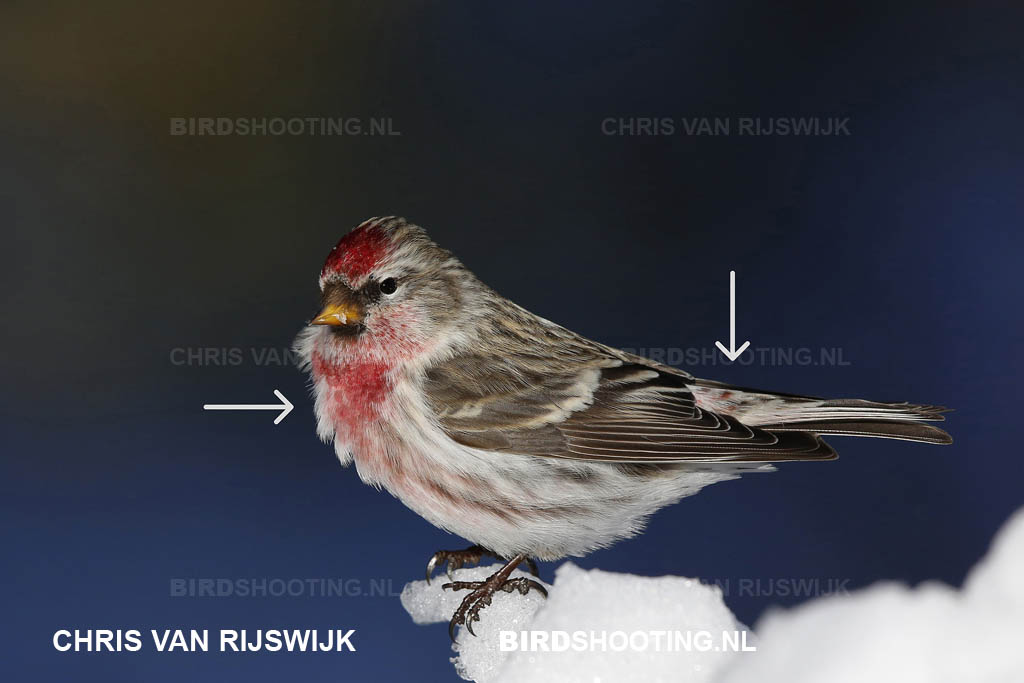 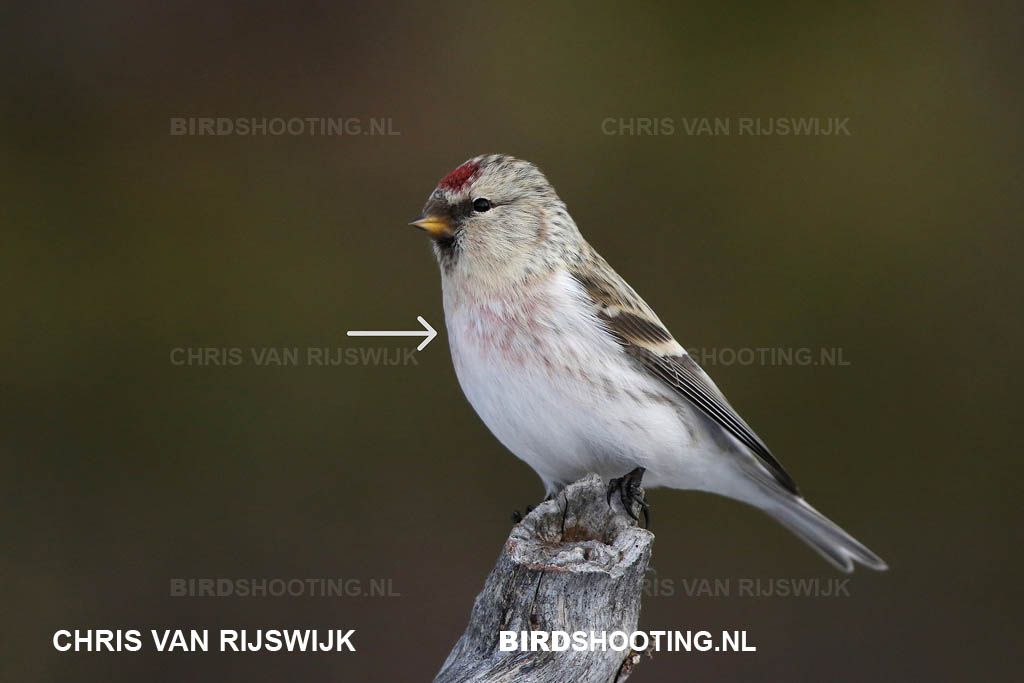 Adult female
An adult female redpoll doesn’t have the red/pink tints on the breast, rump and/or tail, but she always has a red forecrown. Adult females sometimes have a little red/pink colour on their ear-coverts. 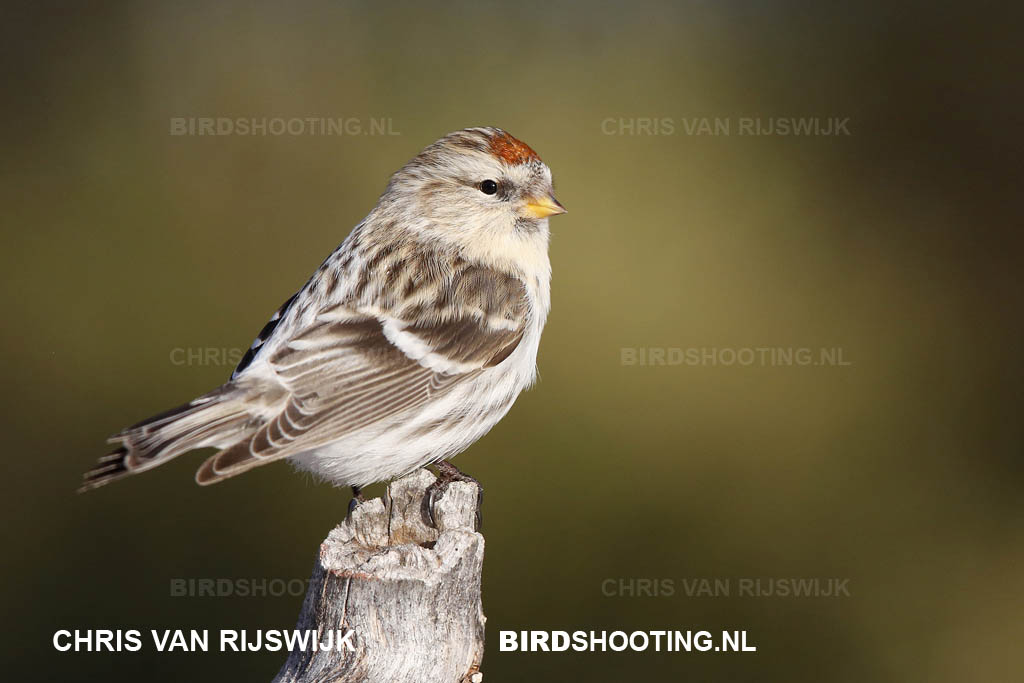 Adult (male and female)
An adult bird moults all its feathers after the breeding season and has, among other things, fresh tertials and fresh greater coverts in Autumn, Winter and Spring. The tertials are the inner-most secondaries and they are generally highly visible in the field. You can recognize the fresh tertials and greater coverts by the lack of wear and by the presence of a white (or pale) fringe. Later in the breeding season (June), the tertials and greater coverts have more wear, so this feature of ageing can’t be used then. This feature is especially useful for the period of time when the feathers of the birds are still fresh, so later in the year this feature is less useful because the feathers of adults birds also show traces of wear. 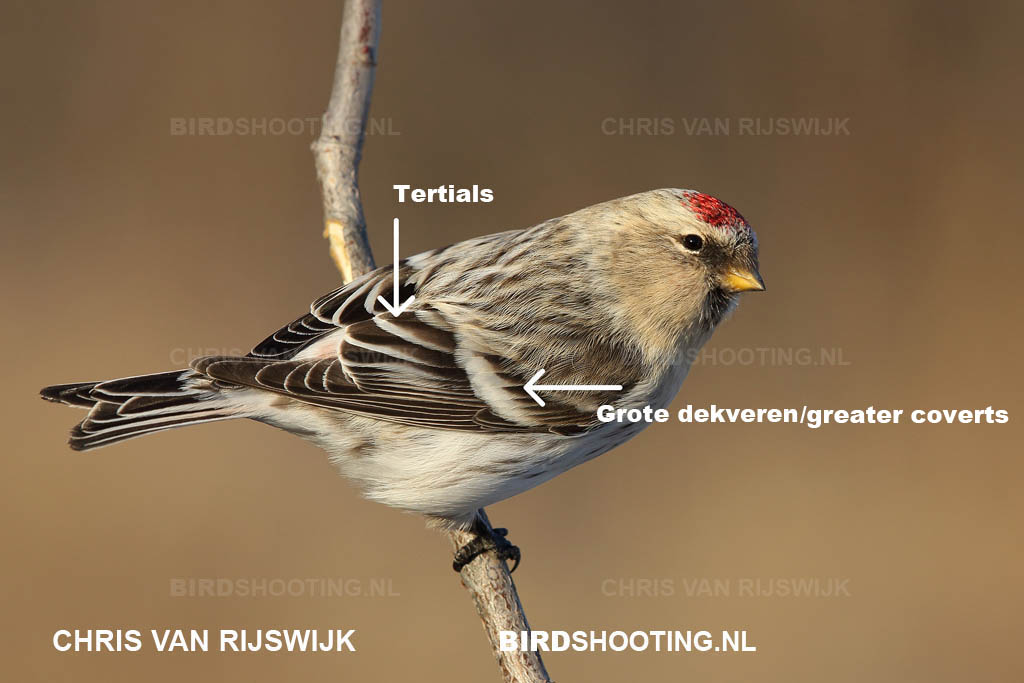 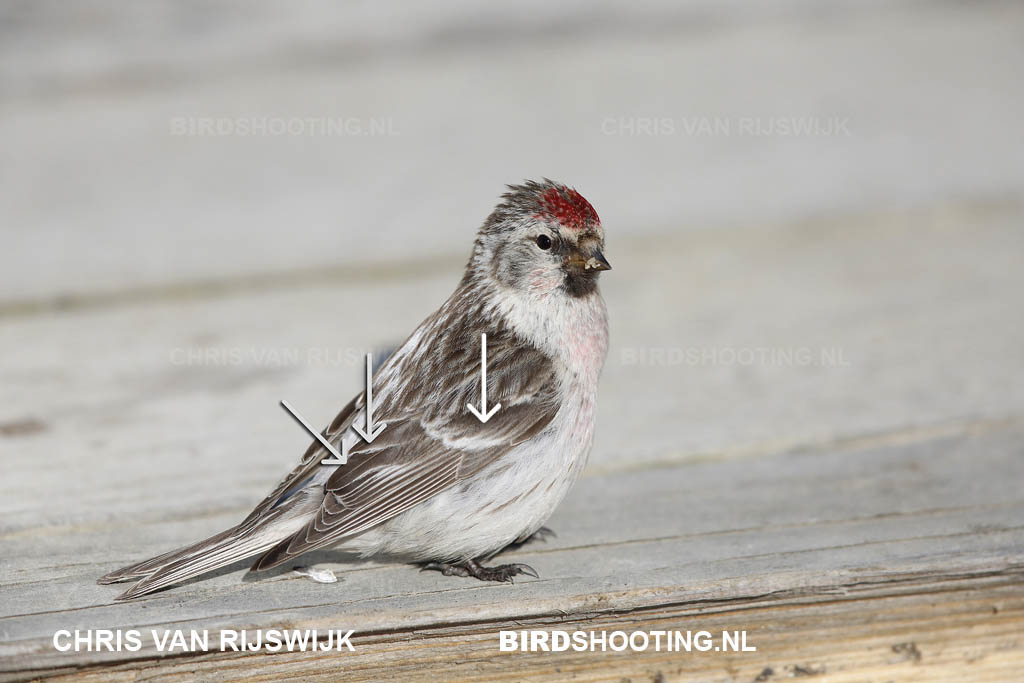 Please note: later in the year this feature is less useful. I find it difficult to recognize it in the field and it doesn’t always apply as adult birds can have pointed tail feathers too. So this particular feature isn’t that useful! 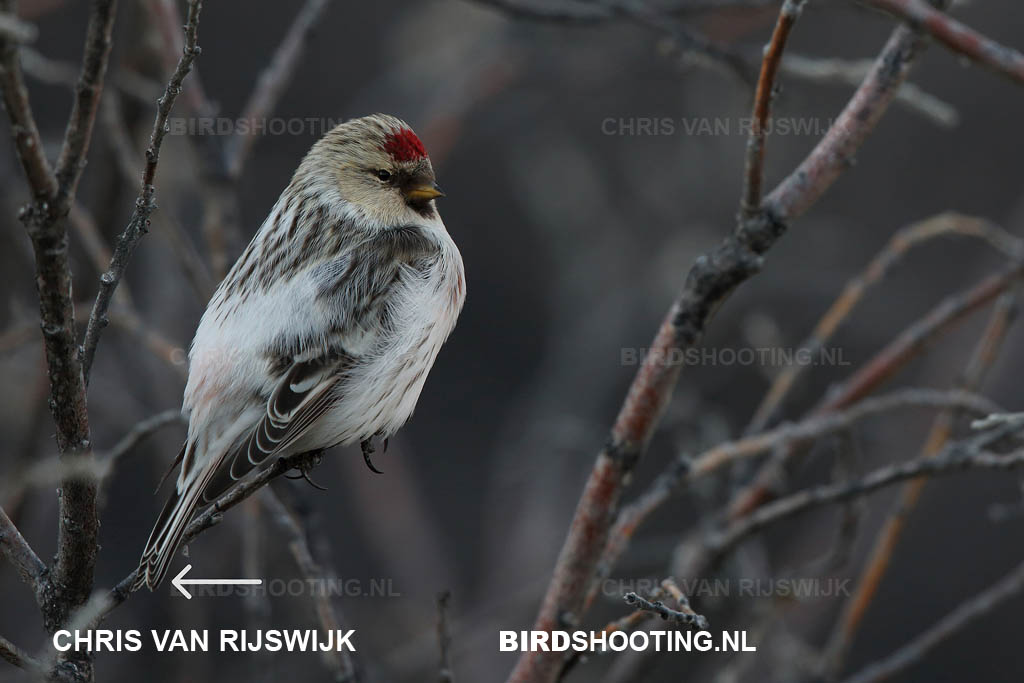 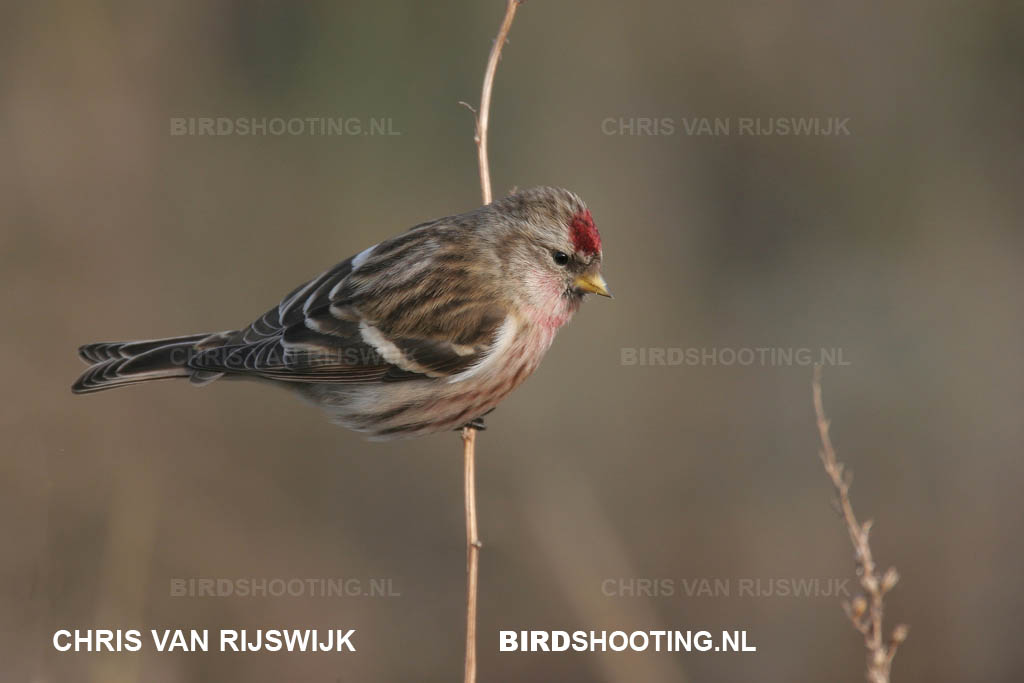 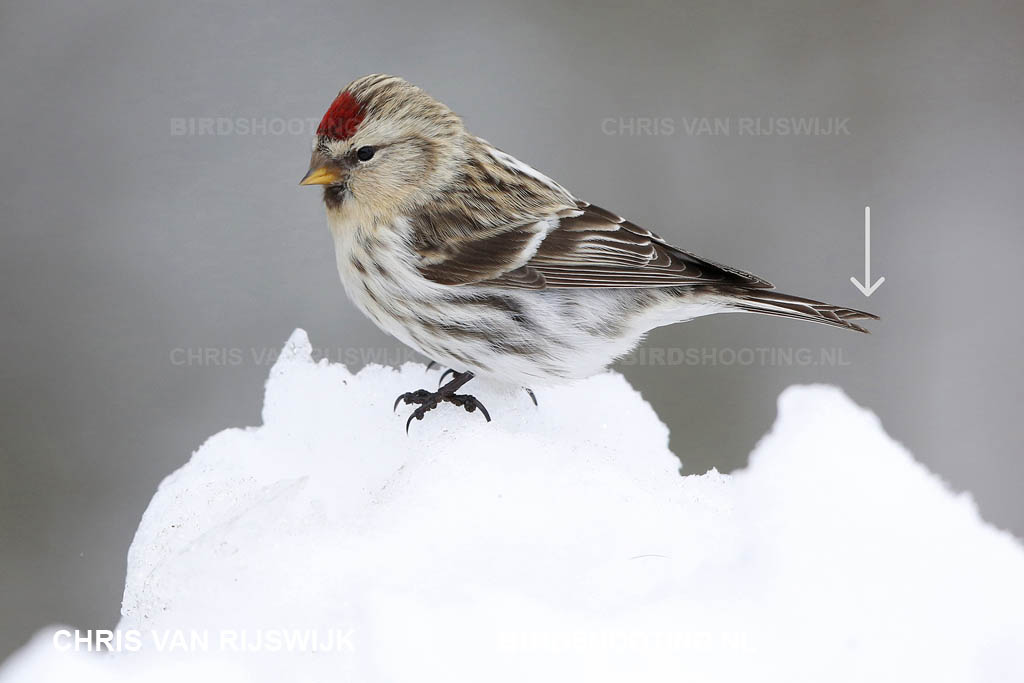 First year
Let’s make it a bit more difficult. First year birds (both male and female) look almost like an adult female. A good indication are the fresh (from adults) or worn (first year) tertials and greater coverts in Autumn, Winter and Spring. But from late Spring this feature doesn’t work anymore because of the feather wear of adult birds. A first year male doesn’t have the pink/red tints of an adult man, but you've probably figured out that already. 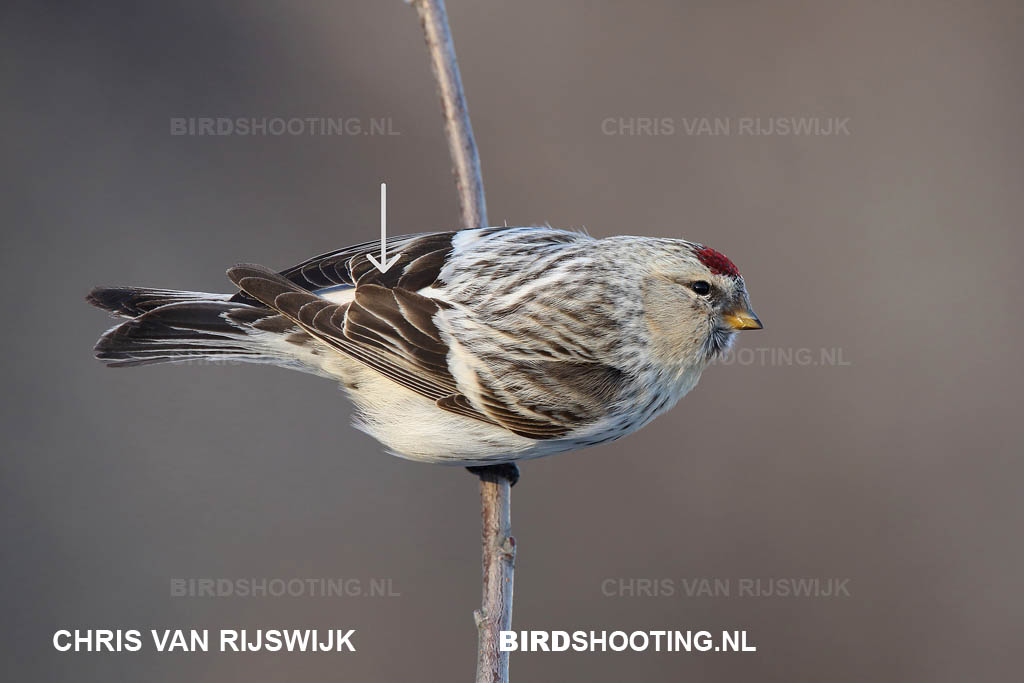 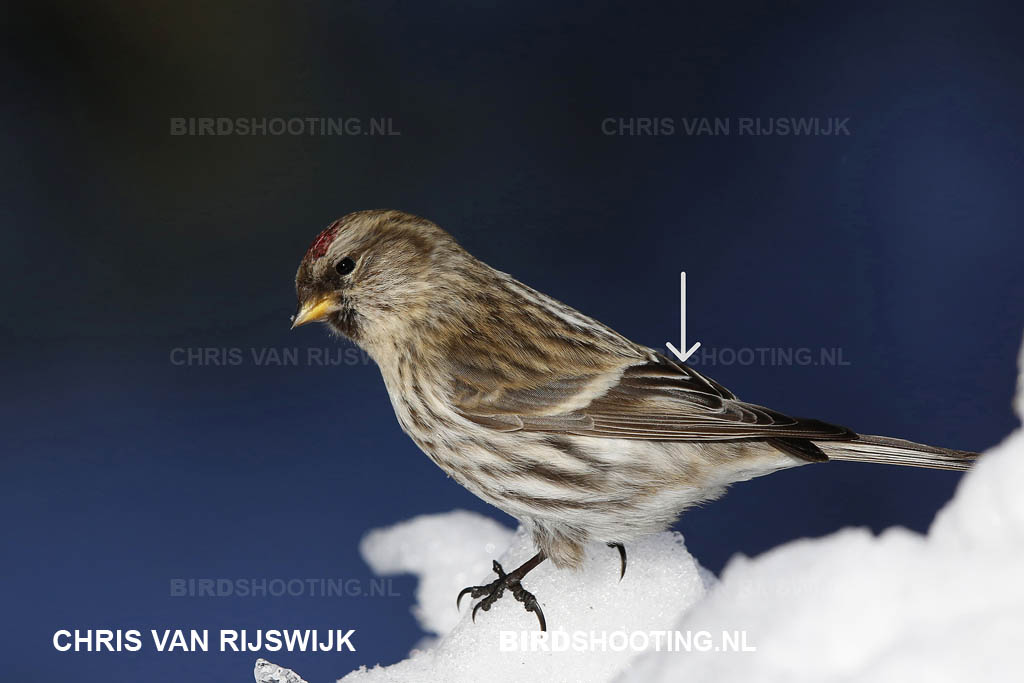 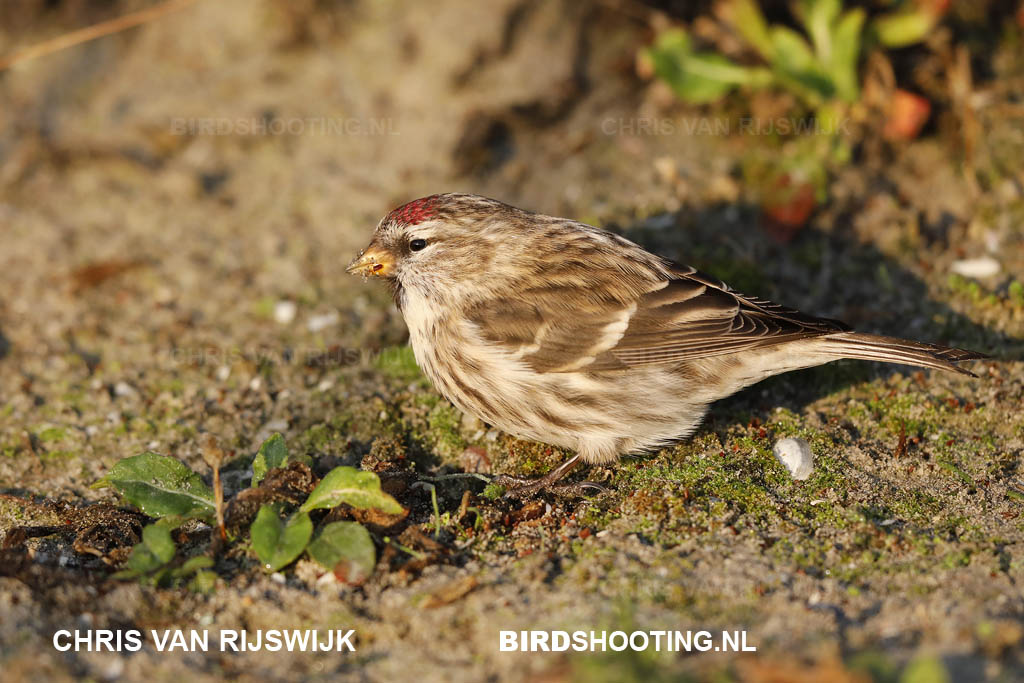 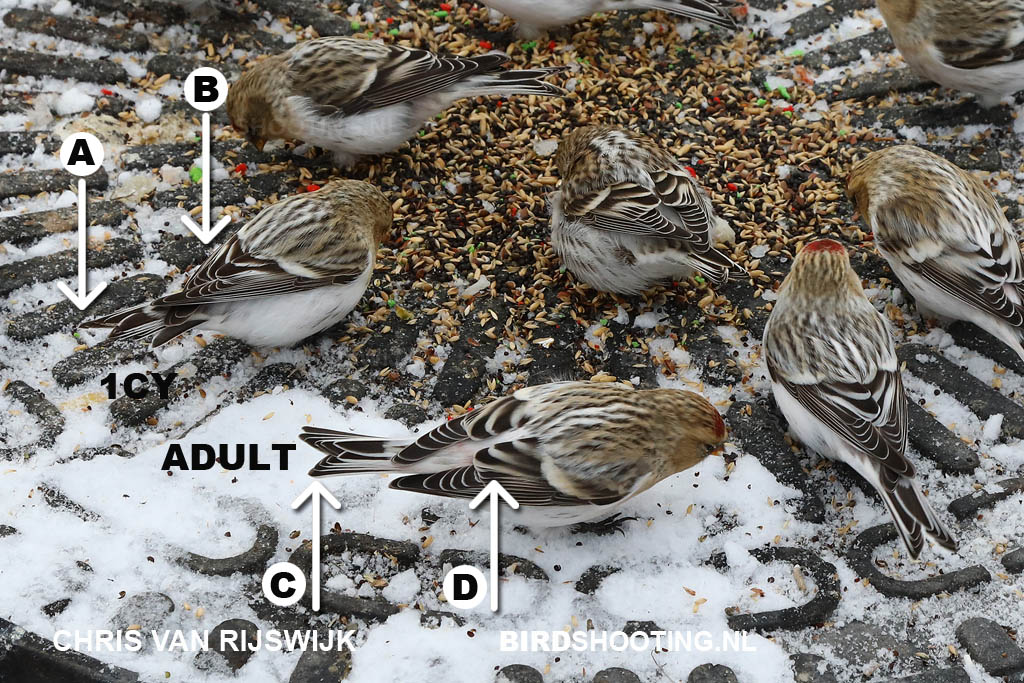 Juvenile
Young birds which have just left the nest do not have the red forecrown. As Autumn progresses the red forecrown will become present. These young birds moult their feathers, except for the tail and a part of their wings in their first Autumn. 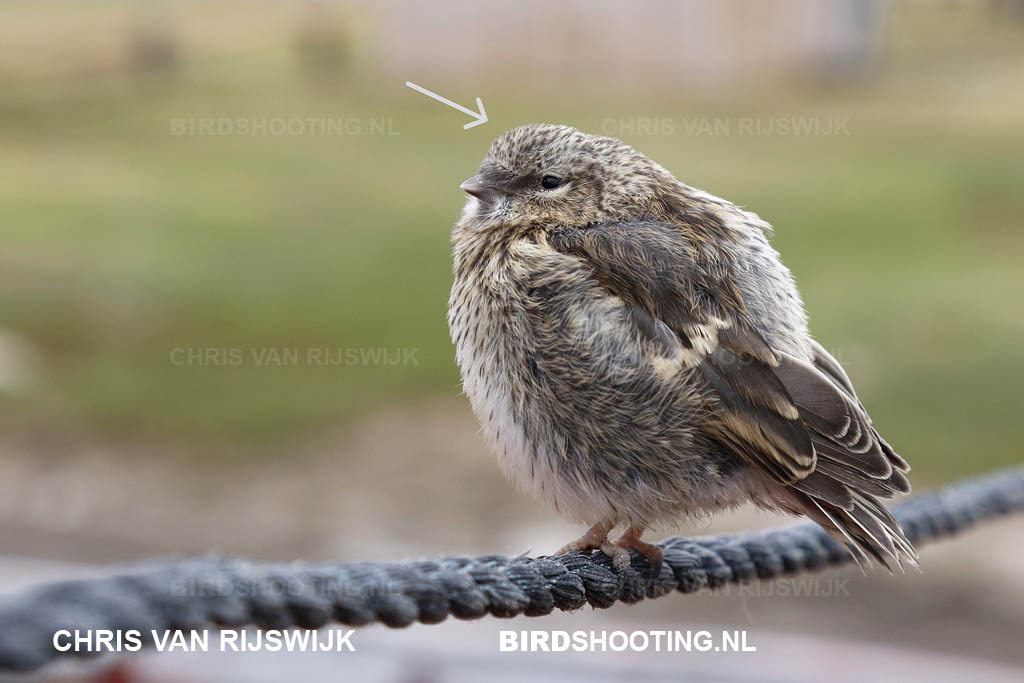 
In captivity
Bird keepers regularly ask me the question how to recognize whether a redpoll is a male or a female. I have two pieces of advice:
• Observe the bird itself: a male will sing later in Winter and during Spring, he will also try to seduce a female and feed her.
• You can easily pluck off some breast feathers from the bird. Give the bird water mixed with carotene for two or three days and within a few weeks there will be new feathers. When the bird is a male, the new feathers will contain red/pink tints. This will not happen if it’s a female. 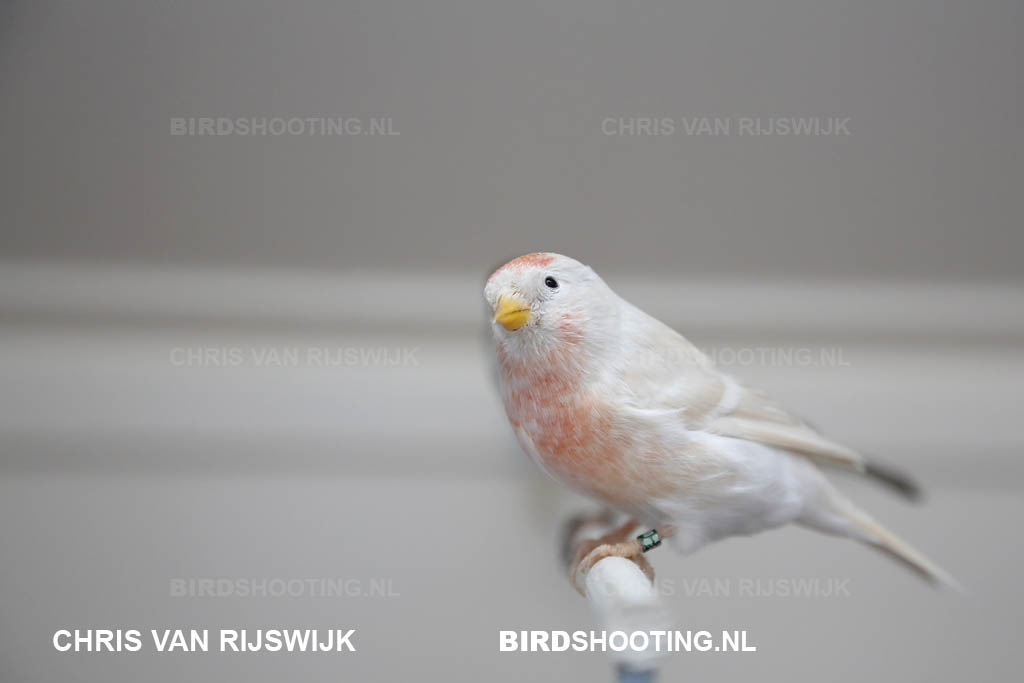