In 2013 I visited Kangerlussuaq, Greenland from the 18th to the 25th of March in order to photograph the redpolls there. Now you might be wondering how one might pronounce Kangerlussuaq. My heartfelt advice would be not to spend too much time thinking about it, only the Inuits are able to pronounce this word correctly…

Kangerlussuaq is a small settlement in Western Greenland, and the site of the country's largest commercial airport. The airport was occupied by the USA as a base of operations during the 2nd World War and the Cold War. The weather is normally bitterly cold in March (with temperatures as low as -30 0C  at midday), but it was unusually warm during my stay, with daytime temperatures of around 0 0C to -5 0C and about -10 0C at night. Lucky me! Because I get cold very easily. The result of this odd weather was that the winter snow was already gone; normally it melts about a month later. In my opinion, Hornemann’s Arctic Redpolls are amongst the most beautiful birds one could hope to witness. The pale plumage, the large size and the soft pink colour on the breast and rump: the sum of which makes them a true beauty. Besides that,  for someone in Europe they’re extremely elusive.

To our knowledge, this little Inuit only passed by the Netherlands once (in 2003). Unfortunately I wasn’t informed about this visit. Now and then the Shetlands are frequented by these beauties; which is a fair distance away for me. Last December one bird visited the ‘mainland’ of England. I went to see said bird together with Max Berlijn. What a beautiful bird! "This is worthy of more attention" I thought. That’s why I decided to visit Greenland as it’s one of the best places to photograph them in the early Spring. There are a number of places to stay in Kangerlussuaq (it is a surprisingly popular place for tourists to visit, although many of them are hunters seeking Muskox trophies). I stayed at Polar Lodge. 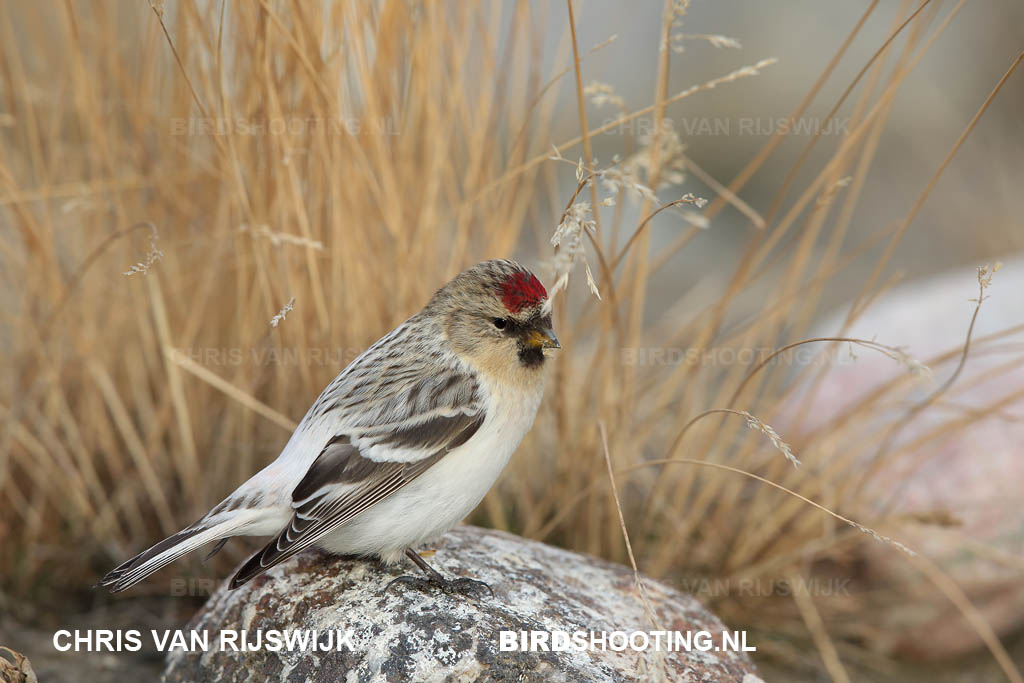 Taking pictures in Greenland is anything but hard work. My photographing each day was limited to the first hour after sunrise and the last three hours before the sun disappeared behind the mountains. For the rest of the day, the light was too harsh, so I spent this time editing my photographs, socialising with the locals, checking in on everyone back home and preparing for my next photoshoot of the redpolls. There was no other birding to be done in the vicinity at that time of year; the surroundings were all very barren and hence relatively birdless. Besides the redpolls, I saw just one Snow Bunting and many Ravens, but no other birds at all during my week-long stay.

Next to the lodge I stayed at I made my own feeder, which was soon discovered by the redpolls. My ‘redpollfriends’ were tame and let me take a closer look. Some of the birds even felt confident enough to sit down on my knee, shoulder or  even my head! After a while one begins to recognize each individual bird.  One bird was always first to land at the feeder, the rest of the group liked it because then they could see if the coast is clear. One bird was ill, I could see from its feathers; I felt sorry for her, but I couldn't help her. A third one took more space than the others and a fourth bird remained at a distance and looked suspiciously at me, as though I were going to transform into a Sparrowhawk at a moment's notice.  And finally we had a little monster. He usually arrived last and would fiercely to peck around him till the whole group was at a distance. It was all needless, redpolls are very sweet and treat each other kindly. The little monster was so busy scaring the rest of his species that he barely had any time to actually eat.

One redpoll was truly my friend. He'd always come to me and ate seeds I dropped out my backpack. I enjoyed his presence. He looked at me regularly with a strange look in his eyes; like he was asking himself: ‘Why on earth he is in this place?’ Good question though. He was so familiar with my presence that I repeatedly could catch him. It would've been overwhelmingly easy to pull a feather for DNA-analysis, but I couldn’t bring myself risk our bond of mutual trust just for science.

The days passed and after a little over a week, it was good to go home again. On my last day in Greenland I decided not to shoot anymore but to simply watch the birds and observe their behaviour. I said goodbye to my redpoll-friends and sprinkled the remaining seeds at the feeder one last time: it almost became a ritual to me by then.

A description of the birds
The Hornemann’s Arctic Redpolls were easily identified by their large size and light appearance. This was noticeable even in flight, when the birds looked distinctly bulky for redpolls. They were all basically similar in colouration, with a whitish base colour and little streaking (the females being slightly more streaked than the males), a buff face, black throat and a small red forecrown; the rumps were white, but a few birds showed minimal dark markings on the rump; the undertail-coverts were white, again with just a few birds showing a fine black line on their undertail-coverts. The white band above the bill was wide (but regularly interrupted by black). The leg feathers were long and loose and the legs themselves were black. The males showed a variable subtle pink tint on the face, breast and rump. Although the birds were all generally similar, there was some variation in their plumage. Some males were paler than other males and some were more streaked than others – this was possibly age related.

The single Greenland Redpoll I saw was very distinctive: noticeably smaller than the Hornemann’s Arctic Redpolls and dark brown in overall plumage appearance. In flight, it looked very dark, (at least among the Hornemann’s) and it was heavily streaked. It also had a heavier bill and shorter leg feathering. The rump had a whitish ground colour, but with broad, dark streaking. The legs were also black. This bird was much more aggressive on the feeders than the Hornemann’s.

Birding World published an article about my trip to the redpolls in Greenland in Autumn 2013: 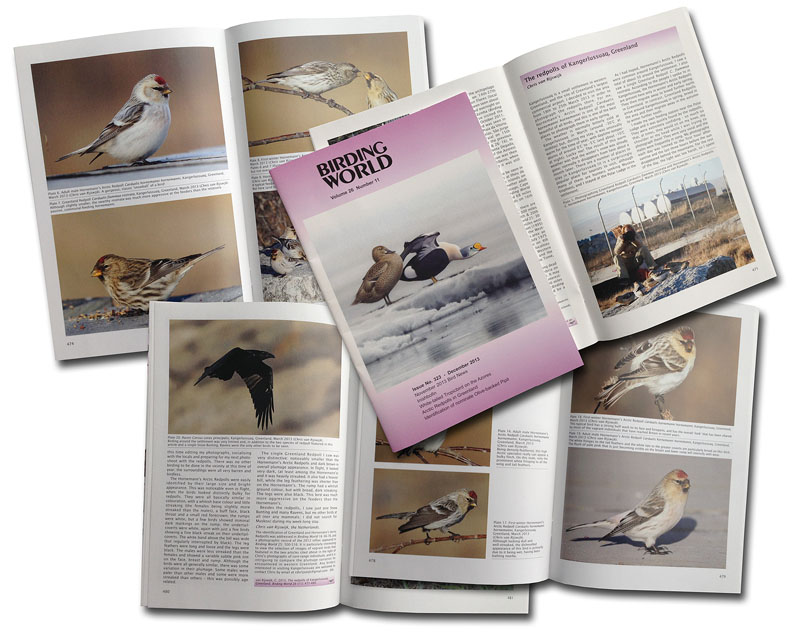